How to qualify for a Approved Auto Loan 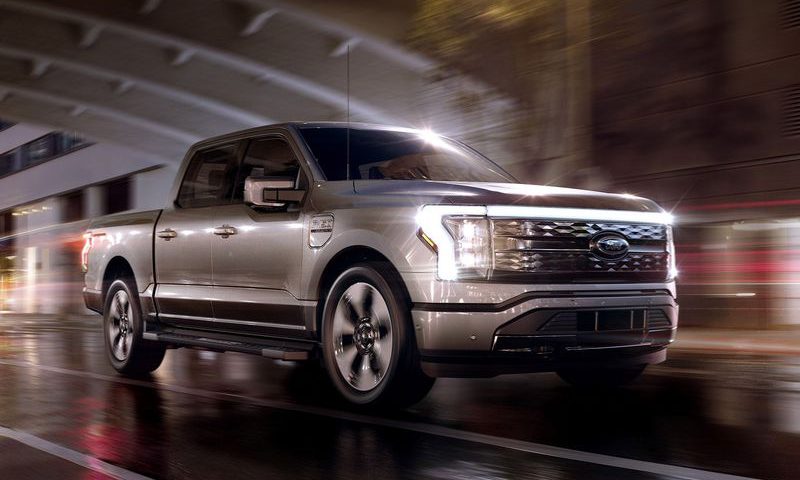 The 2022 Ford F-150 Lightning full-size all-electric pickup is a thunderbolt that strikes at the heart of an industry hurtling toward the adoption of electric vehicles. That heart is shaped like, well, the American full-size pickup truck market.

The F-150 has been the best-selling truck for 44 years and Ford has tampered with it big time to produce the new electric Lightning. The F-150’s combustion engine is replaced with batteries and electric motors, normally an insignificant, regulation-satisfying pivot in today’s car market, but on a high-volume vehicle such as the F-150, it potentially represents a seismic shift—not just for Ford but also for the industry and its overall adoption of EVs.

The Lightning does not replace the “regular” F-150. It instead expands the truck family with a smoother, more aerodynamic electric version with cool lighting and wheels. It comes only with the four-door SuperCrew cab and a 5.5-footbed. The look is distinct, with traces of Mustang Mach-E, but remains instantly recognizable as an F-150. Ford leadership told the truck’s designers it did not want the 2022 F-150 Lightning to look like a science experiment.

Why should a loyal pickup truck buyer consider the 2022 Ford F-150 Lightning when it goes on sale in May 2022? Because it boasts few compromises but delivers various superlative features that might make the conventional truck look like an outright Luddite.

Just as sudden as an actual lightning strike, the F-150 Lightning becomes the quickest and most powerful F-150 in the lineup. Ford estimates it can accelerate from 0 to 60 mph in 4.4 seconds.

Another key point: The 2022 Ford F-150 Lightning becomes the first F-150 to get an independent rear suspension—necessary for packaging the rear motor—along with its corresponding benefits to ride and handling. The truck does not have air suspension.

In other words, the Lightning not only goes electric but also addresses common complaints people have of most trucks: fuel economy, ride, and handling.

How Else Does The F-150 Lightning Differ From The Standard F-150?

Riding on a new EV platform, with the latest electrical architecture and fourth-generation electronics, the F-150 Lightning becomes the smartest and most connected truck in Ford’s lineup, offering a new wealth of features and apps, along with a giant 15.5-inch touchscreen to access many of them.

It also makes it easier to receive over-the-air software updates throughout its lifetime to address potential issues and to also update and add new features, such as better maps, seamless charging and payment, or enhanced BlueCruise, Ford’s hands-free highway-driving assist system.

The 2022 Ford F-150 Lightning has been in the works for about three years, and it is the first vehicle on a new dedicated electric vehicle platform. The skateboard was designed from the ground up with a new frame positioning the battery pack between the rails, extending between the front and rear motors. There are no plans to add a third motor for performance. An exoskeleton, waterproof casing, and full-body metal skidplates protect the battery.

Ford did not reveal the size of the Lightning’s pouch-style lithium-ion battery packs. The high-energy-density cells use a nickel-manganese-cobalt cathode chemistry with particularly low cobalt loading. They will come from the new SK Innovation battery plant in Georgia. For repairs, technicians will be able to remove suitcase-sized sections of the battery.

The skateboard is flat and low, which makes loading items into the front trunk (frunk) easier. The front suspension was also bolstered to give the frunk a payload of 400 pounds. 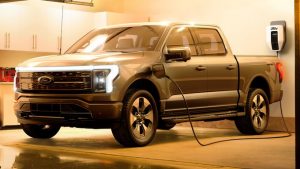 All trucks come with a mobile charger that can either plug into a standard 240-volt outlet, which provides about 20 kilometers per charging hour at 32 amps, or into a regular 120-volt outlet to charge at 5 kilometers per hour. The new 80-amp home charger, Ford Charge Station Pro, is the better way to go, charging up 50 kilometers of range in an hour and getting the larger extended-range battery from 15 to 100 percent charge in about eight hours.

At a DC fast charger, the extended-range Lightning can gain 86 kilometers of range in 10 minutes and charge from 15 to 80 percent in about 41 minutes. The charge port is on the front driver’s side of the vehicle, as opposed to the Hummer, which puts the port at the back of the truck on the assumption owners will back into the charger stations.

Ford has cobbled together a network of 63,000 charge plugs from assorted partners, and the number grows. On-screen apps help find available chargers and are supposed to show, in real-time, if they are working and available. Customers can use the FordPass app to access them. Buyers will receive the first 250 kW free, which should be good for about four full charges. The onboard Intelligent Range feature will figure out the best places to recharge, factoring in weather, traffic, payload (determined by onboard sensors), towing weights, your driving habits, and more, to adjust the range accordingly.

Using The Ford Lightning To Power Just About Everything 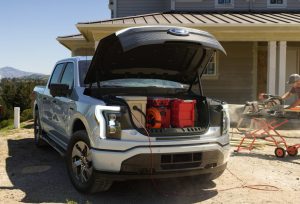 With Pro Power Onboard, the 2022 Ford F-150 Lightning can power tools at a worksite or toys at a campground or your house (for a time). The Lightning has 11 outlets for power, with four 120-volt outlets and one 240-volt outlet in the bed, and four more 120-volt outlets in the frunk. If you add USB ports, there are 21 outlets total, rivaling some apartments.

If the battery level falls below a third of its full range, drivers will get a FordPass notification to decide whether to keep powering tools or preserve the energy for travel. The all-electric F-150 can be programmed to stop using Pro Power Onboard when the battery level approaches the distance to the next charge station.

With the home integration system, if there is a power outage, you can also power your home for three days—10 days if you ration—with 9.6 kW of Ford Intelligent Backup Power. If the truck is plugged in at home, the automated system will recognize the power is out and pull juice from the truck, through the wall box, and into the inverter, which is tied to the home’s central electrical system. When power is restored, the vehicle will resume charging.

In the future, Ford Intelligent Power will allow you to charge your truck overnight when electricity is least expensive and send the power back into the house during high-cost, peak-energy hours to help keep overall costs down. 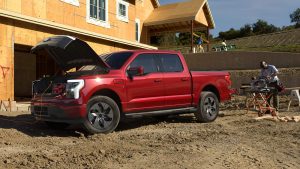 Ford went with the most popular configuration for the F-150 Lightning—SuperCrew—and it does not plan to add others. The extra cargo space in the frunk somewhat negates the need for a longer bed.

Lighting is key to the look. Lightbars span the vehicle’s width front and back, making it look a bit more futuristic. Headlights and taillamps have their own signature shape, and exterior zone lighting encircles the vehicle. There are also lights in the frunk and in the bed.

The blacked-out chrome grille (which matches the chrome on the beltline) is attached to the hood; they open as a unit to access the frunk. The wheels have an aerodynamic beveled design and come in 18-, 20-, and 22-inch sizes. The F-150 Lightning also sports a new, elongated, aerodynamic running board.

The word “Lightning” is in script on the sides of the bed, and the tailgate displays a Lightning badge with an American flag badge. The latter idea seems popular; it can be found on Jeeps and on the new Hummers.

The cab is largely the same as the conventional F-150, with a large exception: Ford redesigned the instrument panel to accommodate a 15.5-inch vertical touchscreen for Lariat and Platinum trims, similar to the one in the Mustang Mach-E EV, with some modifications. It has a huge “volume” ring embedded in the screen at the bottom—quite a marvel—and it uses Ford’s latest Sync 4A infotainment system. Some of the materials and colors are also unique to the Lightning. 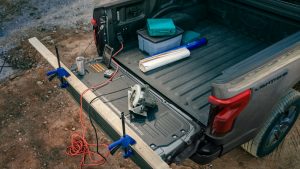 The Lightning has the regular F-150’s 180-degree reclining front seats for a nap and a console that flips over to create a workspace when the gearshift is folded out of the way. The tailgate opens the same way, and the work surface and bottle openers are intact—something customers wanted. The cargo box retains the same dimensions to ease the transition for past truck owners, who can easily transfer their accessories and tools to the new truck. More than 95 percent of accessories carry over from the traditional F-150 to the Lightning. 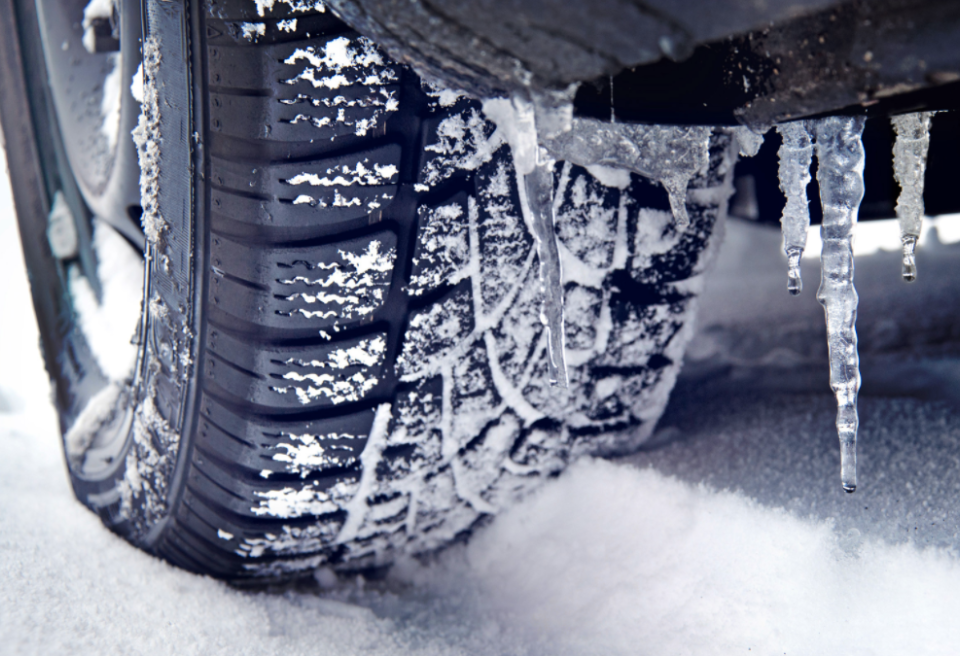